UPDATE (Feb 28, 2010): The IronPython team recently announced IronPython Tools for Visual Studio, so this project is no longer being maintained.

Lately, I’ve been experimenting with the new editor APIs in Visual Studio 2010 to build some simple extensions to make Python editing a little better. Helpfully, IronPython exposes most of the complicated infrastructure (the tokenizer) to make the job easy. The documentation for the new editor APIs is still a bit weak; hopefully that will improve by the final release. In the meantime, the examples are the best source of information. There also a series of blog posts by Mike Feingold about the NDjango editor for VS2010 that form a great end-to-end example.

Download IronPython Extensions for Visual Studio 2010 (and the source code; Ms-PL as always) from my BitBucket repository or from the Visual Studio Gallery (direct link). For direct downloads, just run (double-click) the .vsix file to install it into Visual Studio. Otherwise, you can use the extension manager (search for "IronPython") and install it directly from Visual Studio. 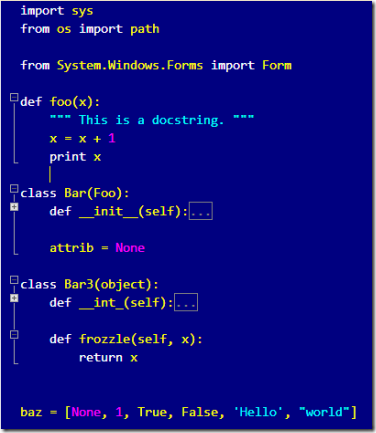 In the future I'm planning on adding project support, templates, and (most difficult of all) IntelliSense.
an unknown author
Posted by jdhardy at 11:05 AM
Email ThisBlogThis!Share to TwitterShare to FacebookShare to Pinterest
Labels: IronPython, Visual Studio 2010
Newer Post Older Post Home