UPDATE (Feb 28, 2010): The IronPython team recently announced IronPython Tools for Visual Studio, so this project is no longer being maintained.

Last week I uploaded version 0.4 of the IronPython Extensions for Visual Studio to BitBucket and the Visual Studio Gallery. This release includes a couple of new features and some minor performance improvements to the old features.

Squiggles! The editor will now underline inconsistent tabs (mixing tabs and spaces) and syntax errors. It doesn't currently display a tooltip explaining what the underline is for, or offer any automatic fixes, but those should be coming soon. 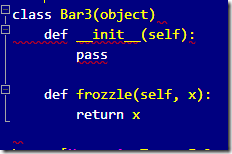 Also new is an interactive console for use in Visual Studio. The advantage this has over a normal IronPython console is that it will syntax-highlight the console history. Eventually I'd like to have it pull the colour scheme from the editor.

What Else is Included

This release includes the features of the previous release – syntax highlighting and outlining of classes and functions – but I've improved the performance of both to make the editor a little snappier (not much, mind you – ever try running a profiler on all of Visual Studio?).

Besides some minor changes to all of the existing features that I'd like to make, there are two big pieces missing: a project system and IntelliSense. IntelliSense is the more interesting of the two, so I think I'm going to tackle it next. If anyone wants to tackle the project system, let me know and I'll give you some pointers.
Posted by jdhardy at 9:07 AM
Email ThisBlogThis!Share to TwitterShare to FacebookShare to Pinterest
Labels: IronPython, Visual Studio 2010
Newer Post Older Post Home